2022: The year that changed the rules of the games

You’d be forgiven for thinking the end times for oil and gas are here. Plague and now war have shaped the sector in ways unimaginable in 2019.

The world will never be the same again, and yet 2022 has shown that the energy industry is highly responsive to change, and will sustainably transform with more ease and willingness than naysayers would like to suggest.

The war in Ukraine, and its disruptive impact on oil, gas and electricity prices, has prompted unprecedented state intervention into the energy markets in order to punish Russia and to secure supplies – two aims that are usually in opposition. In the UK, rising energy prices for consumers, set against record profits for producers, has prompted an oil and gas windfall tax that may deter future upstream investment and hamper domestic supply efforts, while France and Germany have set about fully nationalising their major utilities, EDF and Uniper, respectively.

Meanwhile, Western nations have imposed an oil price cap on Russian crude and placed restrictive sanctions on anyone doing business with Russian entities.

Set this against the broader backdrop of the energy transition, and there’s little wonder that investors are somewhat cautious about where to deploy capital.

But the reaction by the energy majors and utilities has largely been encouraging, with most having taken advantage of the favourable cash-flow conditions to reinvest and reorganise their businesses in line with differing energy transition strategies.

This has been underpinned by bullish public market movements, with stock prices gaining significantly over the course of 2022, especially in the US, where a bucket of oil-heavy stocks has seen a gain of more than 40%. These results are in stark contrast to the tech-dominated NASDAQ that has dominated investor attention over recent years. This may show the beginning of the end of highly inflated tech multiples and the return to the good old-fashioned value equities.

Bucket of US and European Energy Stock Prices, Indexed Against Benchmarks | Calash, 2022 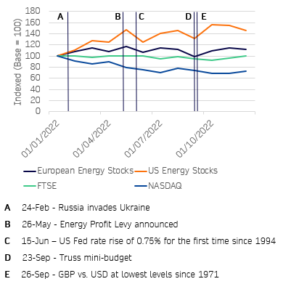 Shell’s acquisition of Sprng Energy from Actis for USD 1.55bn triples its portfolio of operational renewables capacity, of chiefly solar and wind, to well over 10 GW. Eni has made progress with its renewables and gas supply carveout Plenitude and is aiming for a 2023 listing, while BP has acquired bioenergy company Archaea for USD 3.3bn.

Schlumberger has changed its name to SLB, Wood has jettisoned its built environment business, Baker Hughes has executed several transactions, and Wood Mackenzie is now in private equity ownership.

Each company has pivoted and pitched this way to hedge against volatile market shocks and reposition for the transition. They remain under intense stakeholder scrutiny, with participants across the value chain having to justify their strategic decisions with far more clarity than ever before.

Quietly cautious optimism is at the heart of the investment landscape going into. Oil and gas, especially gas, is no longer the sin investment that it was 18-months ago. The continued need for hydrocarbons has been demonstrated by the squeeze on supply. However, outside the energy bubble, the macroeconomic environment for 2023 is not looking healthy, leading to a tightening of debt markets and a wariness towards anything exposed to GDP decline.

While renewables will continue to attract investors from all angles seeking exposure to the energy transition, many of the equipment and service providers have yet to see the benefit of higher power prices.

The regulated, tariff-driven cost base of many renewables projects places a ceiling on the amount of capital that developers and independent power producers can spend on construction and maintenance, while the price of materials and transportation has rocketed, leaving the supply chain acutely pinched.

Project margins have suffered for everyone, from the large turbine manufacturers, right down to the small, family-owned engineering service providers. In comparison, oil and gas might be in long-term decline but it remains a cost-reactive sector that flexes with the market and has an attractive supply chain in which to sell equipment and people.

The renewables industry is maturing each year, with a reset in the relationship between operators and suppliers likely to occur through 2023. In the midterm, subsidies are falling away, and more projects are now exposed to merchant power prices, which will eventually loosen up the fixed revenue base of the developers and allow the evolution of a less rigidly priced supply chain structure.

Going into 2023, for many, the opportunity at hand is to make as much money from oil and gas as possible and continue reinvesting into new areas of growth. Carbon capture and hydrogen will play increasingly important roles as large projects begin development and whole new ecosystems of support are required.

The engineering skills and technologies of oil and gas have a large degree of transferability into these new applications, so suppliers need to use the next year to win market share and bolster credentials that will stand them in good stead for the coming decades.

It’s a bit of a tired statement, but digital technologies will take centre stage over the next 12 months, driven by the need to cut emissions, balance energy grids, automate supply chains, increase safety, and make up for a reduction in manpower. Electrification, particularly EV charging, will add demand and volatility on one end of the grid, while the increasingly large proportion of renewables adds intermittency at the other.

Entering 2022, there were few who could have predicted the disruption caused by the invasion of Ukraine, or the inflationary overhang from COVID-19. Entering 2023, it feels appropriate to tentatively say that things can only get better, or at least that they are likely to be more stable in 12 months’ time.

Some geopolitical stability will hopefully return and a new normal emerge that balances the energy transition with energy security.

We’ve given our experts at Calash free reign to make some predictions on the year ahead, which range from the obvious to the out-there. Needless to say, these should not be taken too seriously. Energy market Nostradamus’ are usually either ill-informed or charlatans!

By Patrick Harris and James Kirby

Back to Insights
Manage Cookie Consent
To provide the best experiences, we use technologies like cookies to store and/or access device information. Consenting to these technologies will allow us to process data such as browsing behaviour or unique IDs on this site. Not consenting or withdrawing consent, may adversely affect certain features and functions.
Manage options Manage services Manage vendors Read more about these purposes
View preferences
{title} {title} {title}